I started my hospice nursing career in an inpatient hospice in Washington State twenty-five years ago. Being at the bedside of those who are actively dying is a privilege, and I was happy to return to this role when we opened our Hospice House in Oregon in 2012. When I first started in hospice, I quickly learned about something we call deathbed visions or dreams of the dying. Very often, these would involve family members who had died previously, but on occasion involved children, angels, or light. Only one time in all my years has it involved darkness. It did not take long to have these phenomena become a normal occurrence in my work. I remember years ago talking with the daughter of patient who was close to death. Her mother had been having long, one-sided conversations with someone she clearly knew. Her daughter had no doubt she was speaking with her sister who had died years before, as she had been listening to their debates for years. Often, visions of visitors are less dramatic, and people often can answer me when I ask who they see. When I relay these stories, there are those who scoff in skepticism. I have no idea what it will be like when it’s my turn to transition into death, but I do know I have been witness to many other-worldly incidents over the years. Only time will tell what it really entails when we each take a turn at marking the end of our lives. I have often told family members I want to see what my patients are seeing, but that would mean I was dying, and I am certainly in no hurry to depart the world.

The other things that come with working in a hospice inpatient unit where many deaths occur is far more “woo-woo”. When I first started working at night, I had an older gentleman who was one of our residents for several months. He would get confused and restless most nights but was pleasant and easily distracted with tasks such as folding washcloths, as he kept me company in the quiet night. He died on a day I wasn’t working. When I returned for my next shift, missing the routine of getting him through the night, something strange occurred. I could hear a phone ringing in an empty room, but it stopped the moment I got to the phone to pick it up. This repeated over and over, but only in the four empty rooms. Finally, I just looked up and said “Steve, I hear you. I’m sorry I wasn’t here, and I’ll miss you. Go ahead and go.” The ringing immediately stopped, and I no longer had to chase my mysterious caller.

One of my nurse mentors told me a memorable story of taking care of an elderly, petite Japanese woman at our inpatient center. She was tiny and not even five feet tall. When our nurse would go to one side of the bed to check this woman, she kept getting poked in the lower back. She would turn around and see nothing but an empty chair. This happened several times, but only on side of the bed that had the chair. SJ figured she was clearly in the way of someone, and as soon as she adjusted where she stood, she was no longer poked. SJ found out that her patient had been a twin, but her sister had died years earlier.

Our inpatient center had two separate wings staffed by a nurse on each side. One night, the nurse I worked with had a childcare emergency and had to bring her five-year-old daughter to work. Some of our rooms were empty, so her daughter curled up and went to sleep on the couch in one of these rooms. In the middle of the night, she came out of the room looking for her mom to help “take care of the lady”. When her mother questioned her more fully, her daughter described the patient who had died earlier that day in the room to T. The little girl wasn’t concerned or scared, just thought “the lady” might need something. Young children have not learned to dismiss things that defy explanation. Those filters are developed over time, when adults admonish any such stories as fantasies of the imagination. Talk to those of us who have worked over time in a place where many have died, especially at night. There just may be something to those “flights of fancy.”

When we opened our Hospice House, I was the only nurse who had worked at an inpatient hospice before. I remember telling someone old stories and saying, “Just you wait, we’ll have our own stories eventually.” Sure enough, over time we have had mysterious lights turning on and off, voices, and many unexplained happenings. Some of our night staff get frightened by these things, while others shrug their shoulders and say “Who knows?” It is more common to become aware of these occurrences at night, when there are fewer distractions and it is quiet.

We took care of one patient for weeks at the Hospice House. He was challenging at times and had a difficult death as well, as some do. Many of us are certain he likes to come back to cause a little chaos. When something strange is happening and cannot be explained, I usually just say “Oh, you know it’s J. Just wait, he’ll get bored.” All who worked during that time just laugh and nod their heads in agreement. I saw one of his daughters at a book signing last year and relayed these stories. She chuckled and said, “That would be something he would do!” I roll with these unexplained stories, but love to threaten my husband with telling him my “ghost stories” if I want to rattle him. 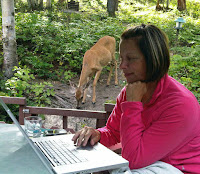 Many people have recounted stories of something happening at the time of a loved one's death. I had never experienced anything like that until my mom died. It was so remarkable that this story was included in the book. I had been traveling back and forth to Montana every few weeks with Callie, my therapy dog at the time, after my mother was diagnosed with ALS. My parents loved to feed the birds and squirrels from their back deck. On my visit to my parent’s house a couple of weeks before Mom died, Dad and I were commenting on the lack of birds at the feeders that year, even when Callie wasn’t around to chase them off. After Mom died, my sister and I started working on her obituary. In the evening, I tweaked our draft a bit to add, “She helped to create a haven for the deer and birds in their back yard, taking the occasional visits by pesky bears, skunks, and turkeys in stride.” Well, the next morning my sister, Dad, and I were out on the deck enjoying some coffee with the fresh air. There was a deer at the feeding block, as usual, but there was melodious chaos with birds EVERYWHERE! My sister said it was like we were inside an aviary. They were flying by our heads, zipping about everywhere in a behavior none of us had ever seen before. It was over quickly and then they were gone, except for a few. We looked at each other and said, “Yes, ma’am, you have our attention!” It was quite an experience and one I will never forget. I think of her often when we have birds flitting about our property. 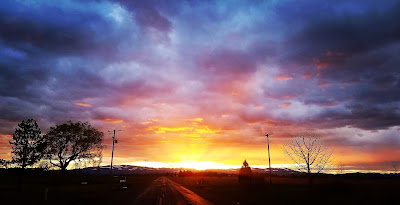 Our house is surrounded by grass seed fields, so the wide expanse of land gives us great views of the sky. We have some incredible sunrises and even more stunning sunsets. Whether it is watching a beautiful sunset, staring up at a starlit sky, or seeing a rainbow form, these displays by Mother Nature remind me of those who have died before me. I smile, because they always help me to appreciate the memories of loved ones. Last year during JJ’s cancer treatments, we had many days when one or two full rainbows adorned the sky. They brought me peace, and I have a few photos with JJ and rainbows in them. I also have some spectacular sunset photos with JJ’s silhouette in them. When I was outside enjoying Mother Nature’s displays, JJ was often beside me. One morning after she died, I was heading to work, trying to adjust to not having my work partner riding shotgun. As I looked in the rearview mirror, I saw a spectacular sunrise and had to pull over to capture the moment. As I kept driving, a bright rainbow appeared. It stayed bright and was with me on my five-mile drive into town. All I could think was “Thank you, Girlie-O”, and it was a great start to my day.

While I don't really think my loved ones are directly sending me rainbows or a magical night sky filled with radiant stars, these wonders of nature make me pause and appreciate all I have and have had with those who no longer are with me. I think of my parents when I see the stars twinkling and often say a quick hello to them. I can imagine JJ still standing next to me watching the gorgeous sunsets. Since she has died, many rainbows have appeared in the sky, often when I am outside with Ember. It’s as if JJ is giving her stamp of approval, and it makes me smile. I am thankful for these reminders of memories I hold near and dear.

In the 1970’s, Jim Henson’s The Muppet Show appeared on televisions across the nation, including ours. We watched weekly, and I still smile at the thought of Kermit the Frog, Ms. Piggy, Gonzo, and Fozzie the Bear. Along with the two cantankerous old men heckling from the balcony, who to my surprise had names, Statler and Waldorf. With a shout-out to Kermit and his creator Jim Henson, who sang a song I still know the words to.

Why are there so many songs about rainbows
And what's on the other side?
Rainbows are visions, but only illusions
And rainbows have nothing to hide
So we've been told, and some choose to believe it
I know they're wrong, wait and see
Someday we'll find it, the rainbow connection
The lovers, the dreamers, and me

Who said that every wish would be heard and answered
When wished on the morning star?
Somebody thought of that, and someone believed it
Look what it's done so far
What's so amazing that keeps us stargazing
And what do we think we might see?
Someday we'll find it, the rainbow connection
The lovers, the dreamers, and me

Have you been half asleep, and have you heard voices?
I've heard them calling my name
Is this the sweet sound that calls the young sailors?
The voice might be one and the same
I've heard it too many times to ignore it
It's something that I'm supposed to be
Someday we'll find it, the rainbow connection
The lovers, the dreamers, and me