A dog, a nurse, and the love of hospice 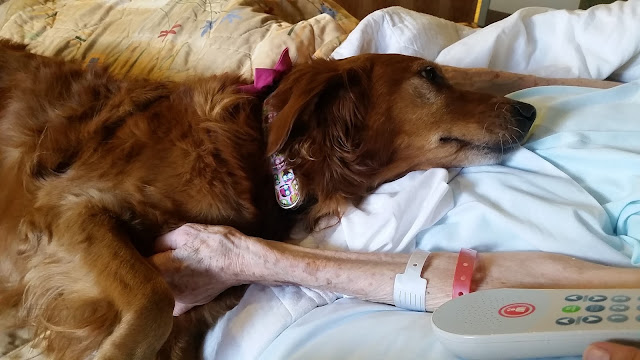 I am a hospice nurse who has been able to combine my love of therapy dogs with my passion for end of life care. In the past several years, I became the scribe for my hospice partner, a Golden Retriever female who went by the name JJ, although she had a much fancier name, Calhoun's The Color Purple. What started almost six years ago with some touching memories, photos, and stories of JJ's work at the Hospice House, has grown exponentially over the years as her social media presence widened.

The topic of hospice and end of life is not something that makes people feel warm and fuzzy, much less encourage them to engage in conversation. In fact, nothing will clear the room like responding to the question "What kind of work do you do?" In twenty five years, I wish I had a nickel for every "That must be so depressing" response to my answer. However, one of the constants in life is the eventual end of such life. No one gets out of it, and as I age, quite frankly I am grateful I don't have to live to be 400 years old.

When we first opened our Samaritan Evergreen Hospice House in 2012, JJ was just a year and a half old. Her nanny and mentor Callie, was the second therapy dog utilized by our hospice program. Callie visited patients with me in their homes before our inpatient facility was built. Unfortunately, she died in 2011, when JJ was just four months old. At such a young age, JJ started her therapy dog training in earnest and passed her first therapy dog exam the day she turned one year old. In our hospice program, we all recognized the benefit of a therapy dog's comfort for not only our patients, but for families and staff as well. We were hopeful JJ would be a good fit once we opened the Hospice House. Since I was the only nurse with inpatient hospice experience, I joined the weekly meetings during the building of our facility. JJ was one of the earliest visitors, long before we were open for business, and the Hospice House quickly became her second home. She worked twelve hour shifts with me, quickly taking on the head of Quality Control role, ensuring our patients were satisfied with their meals through supervising their every bite. She considered herself the official greeter of the Hospice House and could nap as much as she wanted without a dock in her pay. Early on, it was clear she was one of the most popular staff members we had. It was during these first few months that I developed JJ's Facebook page in an effort to share the human-animal bond in relation to hospice care.

While my dedication may be to end of life care, it became clear over time how helpful a dog could be to help bridge a difficult topic with those who aren't used to being pragmatic and open about these matters. JJ was such a dog, and she quickly taught me how her antics and stories could reach others in a way a person never could. While some people decided having a dog "speak" to them was childish, I found her voice gave a more lighthearted approach to an often heavy topic. She was sassy in her approach to life at home, and quickly became sassy online as well. She made it easy to present the fun-loving, playful aspects of her work day, showing how dogs can live in the moment, show love and compassion in times of need, and yet shake off the stress and move on to the next mooching assignment or belly rub demand.

I shared the heartwarming and often emotional stories of her spending time with dying patients and their families, as well as the very poignant descriptions of JJ’s self-taught walkouts. When a patient dies, we honor them by having staff line the halls as we walk their body out to the funeral van. We have a special walkout quilt, either for a veteran or civilian, and JJ taught herself to walk next to the gurney during the very first walkout we had. These stories are the ones that often elicit the most emotion in readers.

JJ was also known for her “bed visits”, when she would get up on the bed with a patient who wanted her up with them. This could only happen when I was at the bedside and it often required careful positioning of JJ next to the person. These visits were often very helpful to help relieve a person’s anxiety or agitation. I often enlisted JJ's help in easing someone's symptoms as we waited for medication to take effect. The magic of these interactions was an amazing thing to witness. When things were slow, there were times I would sit at the bedside of a dying patient if they didn’t have anyone else. During these times, JJ often joined me. A few years ago, we were sitting with someone who was actively dying. She had no children, but I knew from her caregivers that she liked pets. JJ indicated she wanted to get up on the bed. It was a rare time when I got video of JJ putting her head under this woman’s hand, finally getting her to pet her after she was non responsive all day. Yeats was playing in the background and after I took this short video, JJ settled in for a long nap with her as I finished my charting. When I reviewed the video and saw there was no identifying information, I shared it as an example of a bed visit. About eighteen months later, after a re-share of this video, I experienced viral video madness, and JJ's stories and message started to reach so much farther than I could ever imagine.
Labels: hospice jj hospice therapy dog therapy dog