From Bad to Barke Diem 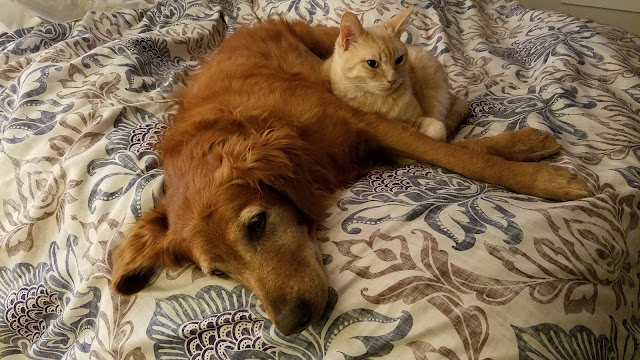 In the week following JJ’s thoracentesis, the removal of the fluid from the pleural effusions, she also started to have some signs of nausea. She stopped eating and the next day clearly was not feeling good, appearing nauseated. I brought her to work, knowing I would have many eyes to watch over her condition while she slept. I couldn’t get oral medication into her very well, so I phoned our regular vet and asked for a prescription for injectable Cerenia, the anti-nausea medication we used with JJ’s chemo treatments. My husband picked it up and delivered it to us. In our inpatient hospice unit, we often use injectable medications when our patients cannot swallow. On this day, JJ was simply one extra patient to care for. When I called to make another vet appointment, I could only say “something is really wrong”. Her breathing was fine, but as the evening progressed, she had an episode of coffee ground emesis (vomit that has congealed blood in it, looking like wet coffee grounds) and then dark colored stools. I knew we were dealing with gastrointestinal bleeding again. Our option was to go to ER or wait until the morning to get to OSU. Given her complex care needs over the past week, I felt she was in better hands with our oncology team that a vet team that did not know her. Our brains don’t process well when stressed and it had been a difficult week. In hindsight, it was very clear what was happening, but in the middle of it all, I kept thinking that it could be her disease progressing. What I knew that night was that JJ felt very bad, we had made it seven months from the start of treatment, and that we had no idea if the new chemo protocol would be effective. When a person has a life-threatening illness, a palliative care team can get involved, look at the big picture, and help to develop care goals, which then helps to determine which path of treatment to take or not take. I knew this was what we would be doing at OSU the next day. It was a very long night, as I slept next to JJ on an inflatable mattress.

By the next morning, JJ still clearly felt bad, but was not vomiting or having any further tarry stools. She was walking in a hunched posture, clearly having pain. She was rushed for another ultrasound at OSU, this time of her abdomen, which showed a significant bleeding ulcer. She had the beginning of peritonitis, an inflammation of the lining of her abdomen, but luckily it had not perforated. When people or animals receive chemo, the term nadir indicates when the blood counts have reached the lowest point due to treatment. We were facing the perfect storm of the effects of her last dose of original chemo hitting its nadir along with the prednisone creating an opening in her stomach lining, despite the two medications given specifically to prevent this. She had the beginning of an infection due to her low white blood cell count and for the first time had thrombocytopenia, a low platelet count. Our platelets are integral in clotting, and those with low values are cautioned to avoid any injury due to the risk of bleeding. It was bad enough to see bleeding on the ultrasound and JJ was rushed to ICU. For as bad as she clearly felt, the rest of her scans were clear, and we knew this was a fixable condition.

She was started on intravenous fluids, antibiotics, medication for the ulcer, and pain medication. Our animals only have body language to communicate, but we know very well how painful ulcers are in humans. We had a great team that kept me updated with messages and photos while I had to work. I found out during my visit after work that my little princess was too “high” on her pain medications, so her dosages were decreased. I knew the night before she was discharged that she was feeling better. Not only was she starting to eat, but I watched her as she started picking at the blankets. This meant she had enough energy to consider being naughty. To this day, we still have “swiss cheese” blankets decorated by JJ when she protested being locked up against her will. She was thrilled to be broken out of the place the next morning and couldn’t wait to get home.

It took about a week for her ulcer to finally heal. She did come to work with me, as her MAR (medication administration record in human medicine) looked like some of our patients’. Her medications needed to be spread out so they didn’t interfere with others she was taking, so JJ was getting something about five times daily including an antibiotic, two different medications for her ulcer, and a pain medication. Dogs, like our patients who are at the point where they cannot speak, are unable to tell us they have pain. Just as we give these hospice patients their scheduled pain medications they have needed to control baseline pain, we continued to give JJ pain medications on a schedule for three days knowing how painful ulcers are. It would have been far easier had she been able to answer my question of how she rated her pain, but no such luck. She spent a lot of time sleeping those first few days, but it was far better to err on the side of ensuring her comfort. By the third day, we all breathed a collective sigh of relief when she could be woken from a dead sleep to the sound of her cookie jar rattling. 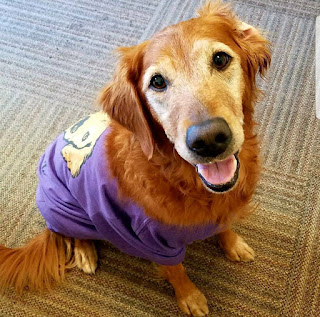 It was during this crazy time when I started emphasizing how I started taking a cue from JJ and did my best to live each day to the fullest. One of our long-time followers helped coin the phrase “Barke Diem”, a dog’s take on Carpe Diem, or seize the day. It was a helpful reminder to me and so many others to live our lives a little more like our dogs. We all know with our hospice work how none of our days are guaranteed.  After a short rehab period, JJ was able to return to her usual routine of playing, eating, and doing her amazing work at the Hospice House. She responded to the rescue chemo protocol and seemed happy to only have to make vet visits every three weeks.

Knowing eventually, time would run out, we packed a lot into our days. While some people create a bucket list for their dogs, we chose to find ways to have fun daily and take advantage of any other opportunities that arose. Even though we had not done any deployments since JJ's lymphoma diagnosis, we were still a volunteer team for HOPE Animal Assisted Crisis Response. I chose to attend our annual meeting in September in Colorado, knowing it would be the last we would attend together.

While flying would have been so much quicker, and our canine partners are allowed to fly in the cabin for HOPE deployments and events like this on some airlines, we were due during that time to have another blood test follow up to know if she was safe to take her dose of oral chemo. We decided to drive and make our appointment at Colorado State University, one of the top veterinary oncology programs in the country. Along the way, we had quite the adventure. JJ was feeling good, we got to visit family in Utah, and CSU found her to be doing well and she was able to take another dose of her medication. I was able to consult with the oncologists about one of the latest drugs developed for canine lymphoma at CSU. I had researched it myself, and knew Tanovia had a better response for B-cell lymphoma. The oncology team had just been talking about the use of it for rescue protocols that morning in their staff meeting. It was reassuring to hear them tell me that they concurred with the current chemotherapy agent she was on. Her blood work was normal and we were cleared to be among our fellow HOPE members, including the dogs. It was a bittersweet time, knowing that everyone attending could relate to both the intense bond I had with JJ and the intense loss when our canine partners were no longer with us.

We made the most of those days on the road. JJ was always a great sport and more than willing to be my road dawg. While people expressed sadness anytime I reminded them of the reality of JJ's disease and prognosis, I was busy soaking in as much as I could. Spending time and making memories was the priority. We took the scenic route, stopped often to take in the sights and stretch, and frequently heard from my husband “You’re stopping again??? When are you ever going to be home?”

Not once during JJ’s year of living with cancer did I think “Why her?” This isn’t to say I was not sad, especially during one of the few days when she did not feel good. I know all of my years in hospice work has clearly taught me that we all have to take our turn, although I would have loved to have had her longer. I remain grateful she tolerated the treatments well, and for the most part, tolerated going to vet appointments so often. When I expected she may live only four to six months, each month afterward was celebrated as a bonus. She continued to have a blast on days off, spent time with her people at work, and treated each day as if it were the best ever. JJ enjoyed some more months of mooching from people at work, passing out hugs, stealing bumpers from the field or dog truck, continuing to perfect the fine art of the non-retrieve, and snuggling with her therapy person, my husband every chance she got. It was a life well lived. Looking back, we would not have changed a thing, except for skipping that darned prednisone the second time around.