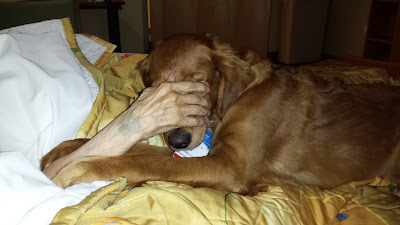 Those of us at the Hospice House had been witness to the power of JJ’s connection with patients, families, staff, volunteers, and visitors since we opened almost six years ago. Simply having a dog in the building decreased the stress level for so many. When JJ wasn’t power napping or mooching, she often would check in with staff in various parts of the Hospice House. She was known for seeking out those who needed comfort for different reasons, often giving hugs to those she hadn’t connected with for days or even weeks. She clearly knew who needed some therapy, although this is always a two-way street for therapy dogs. A good therapy dog enjoys seeking people out, but they also enjoy the attention and love that comes back to them during any interaction. When I shared the video of JJ’s bed visit with the 1,385 people who followed her Facebook page, I never dreamed how this would be viewed by so many around the world.

Some dogs are more intuitive when it comes to providing support to people, and I have often said JJ was my most intuitive therapy dog to date. She spent most of her time off leash and was well known for performing her own rounds. She learned to wait for permission to enter a room, although would often pop her head around the door, checking if it was someone she already knew. Some patients or families wanted her in the room but would have to wait until I had a chance to take her in myself, especially if it was someone I wasn’t taking care of. It was common for staff members to hear stories of how JJ helped people, including when our bereavement counselor followed up with family members after their loved one’s death. She was easily one of the favorites on staff, providing hugs and a quiet presence during times when words rang hollow. It was a common sight to look down one of the halls and see her on the floor with family members, giving them a short respite from their sadness and grief.

I have always loved sharing the stories of the impact of the human-animal bond in hospice work. I distinctly remember telling a story of JJ doing a “bed visit” and re-posting the video I had taken a year and a half earlier when someone asked me to describe what I was talking about. We frequently would spend quiet time sitting with someone who was alone. While sitting at the bedside of one woman, JJ indicated she wanted up on the bed with her. Her caregivers had indicated she liked animals when she was admitted to the Hospice House. Our patient was actively dying, and as JJ would do even with those who were not responding, she nudged her head under the woman’s hand trying to get her to pet her. This intimate video shows this woman moving her fingers on JJ’s head and afterward, JJ settled in for a nap while I finished my charting.

I remember the day I re-posted the video so well, because we were getting close to 1,500 followers, and I had decided to have a raffle for a photo book of JJ at work and play once we reached that number. I had posted about the book raffle earlier that day and several people told me they were going to share the page. The next day, JJ and I headed back to work for our long work stretch. All of us work 12-hour shifts, and once a month, my schedule has me working six out of seven days. You might imagine how I get little done during that time other than eat, sleep, and work. JJ on the other hand, spent those 12 hours sleeping, mooching, and playing to her heart’s content, all while wearing her virtual Super Dog cape, ready to spring into action whenever needed.

The very next day at work, I noticed a big jump in activity on JJ’s page during my first break. I was surprised to see a couple of hundred new followers and could only think “people must really want that book raffle to be held.” It took me another day to realize someone had shared the video, making it go viral. I was too busy at work to notice anything other than the staggering activity over the next couple of days. Phone and email requests for interviews started coming in from different media sources including Huffington Post, The Dodo, Three Million Dogs, and Fox 13 in Tampa. The following day there continued to be interest from various media outlets. USA Today, ABC World News Tonight, BuzzFeed Espanol, and Inside Edition all wanted to speak to me while I was at work. My supervisor called in another nurse to relieve me so I could answer JJ’s media requests. I would have happily appointed her a personal assistant by day four. Even our on-call hospice nurse got a phone call from NBC looking for my contact information. By the end of the week, the story was featured across a wide variety of online media outlets around the world. I think the most interesting one I saw was featured on the Daily Braille. It was incredibly appropriate to have an article written in Braille that described the interaction between JJ and a dying woman who was blind.

During this time, I was deluged by messages from curious viewers asking how to make their dog a therapy dog, requesting a visit for an ill relative (who was often overseas), and how to get involved with my organization.  At the peak of the week, JJ’s social media had a reach of over 27 million people, when we were used to having around 5,000 reached.

It was clear people around the world were touched by their brief glimpse into the innate qualities of JJ that made her such a great therapy dog, while considering our work in end of life care. I was stunned by how far and how many our story reached, although not surprised at the response to this very powerful example of the human-animal connection during such an intimate time in life.

While brief, the craziness of having a video go viral helped boost our reach to many who have given very little thought to the end of their lives and how hospice can be of assistance. While I miss my work partner terribly, I will be forever grateful to the petite Golden Retriever who helped me to continue the conversation about end of life care, hospice, and what is normal during these times. Those who would be reluctant to even entertain such conversations often were drawn out by the antics and compassion of JJ.
Labels: golden retriever hospice jj hospice therapy dog therapy dog