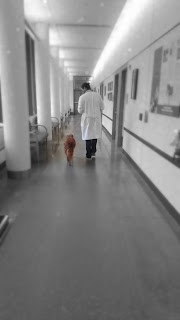 As with any person choosing treatment for a life-threatening disease, deciding treatment options for a pet is deeply personal. Veterinary medicine now has access to many choices used in human medicine. However, such options usually come with steep costs. The reality is, without pet insurance, cancer treatments can go from the thousands to the tens of thousands of dollars. At the end of the day, while many may not agree with me, our pets are animals, and while a part of our family, humans come first. I begrudge no one for making the decision not to treat because the money is needed for food and living necessities. I will tell you that after this experience, we now have pet insurance.

We were in the position to try chemotherapy to help with JJ’s symptoms. I knew well the effects of different chemo medications on the human body but had not yet experienced an animal being treated with it. As a young nurse, I had been chemotherapy certified, as our hospital had an orthopedic surgeon who performed radical surgeries to remove bone cancers. He wanted to ensure people could recover to the best of their abilities with staff who knew how to handle these complex surgeries post-op, but they also needed to start chemo as soon as possible. During that time, we gave a wide variety of chemo medications to these patients, and I developed a healthy respect for what it did to the human body. With JJ, we started down this road knowing we could change our minds at any time if it either wasn’t working to slow down the lymphoma or if she had symptoms that were intolerable.

I was very familiar with the different medications JJ would receive, as they are the same ones used on human patients. As with people, the protocol varied week to week with which drug she received, and it required monitoring of her blood work, which any chemo patient can tell you all about. The response between people and dogs is very similar regarding the effects on bone marrow. JJ was very sensitive to one of the chemo drugs, which often caused her neutrophils, one of her white blood cells, to drop drastically. Our neutrophils are one of the elements that help to ward off infection. In people, we have a drug that helps to stimulate production of the neutrophils for cancer patients who need it during treatment, but it is not used in veterinary medicine.

Instead, our protocol was to skip a week of chemotherapy to give JJ’s bone marrow a chance to bounce back. When her counts were low, she didn’t feel bad at all, but she was at risk for an opportunistic infection. During these times, she was on antibiotics and we could not go anywhere that might have had a high number of dogs. She was cleared to go to work, even when neutropenic, as it would be rare for her to encounter a zoonotic disease (a disease that can be passed from people to animals) at the Hospice House. Otherwise, she acted normally most of the time. She did have a two to three-day time frame once every month or so when she had no appetite and sometimes had diarrhea. 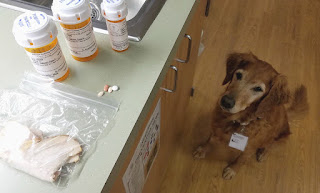 As with people, anticipated side effects can be managed by giving medications ahead of time, which worked well for her. She was a huge fan of the turkey that wrapped her pills. Different cancers involve different treatment options and we knew we also would have secondary protocols we could consider if the current one stopped working.


At OSU, she quickly became a favorite patient, passing out hugs and love to everyone she met. I knew that she spent a lot of time in clinicians’ laps throughout her treatment days. This was no surprise to anyone who knew her from work at the Hospice House. I would drop her off in the morning, and usually pick her up later in the afternoon, especially on the days she required IV chemo. In the never ending small community we live in, one of the techs knew JJ from the Hospice House when we took care of her mother. It was common to read on JJ’s discharge paperwork things like “She is such a sweet girl” and “She’s the best.” She was very tolerant of these visits, although she made it very clear she would have preferred to go home with me each visit. The look on her face slayed me as she dutifully walked next to the tech or veterinary student down the hall for her treatment, looking back in hopes that I had changed my mind. It reminded me of all of the time I spent in hospitals as a young child, not necessarily understanding much other than I would rather be home than on a multi-bed ward drinking mineral oil chased by a sugar pack. Dogs, however, are typically more obedient than young children when it comes to procedures, and I have no doubt JJ was a much better sport than I ever was. In her usual dog-self, living in the moment, all was well in her world when I picked her up and got her settled back into her chariot. Those days typically ended up at a drive through, delivering a small burger or fries her way, further reinforcing life was good. 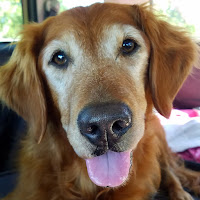 I’m not sure people, including my co-workers, fully understood how well JJ tolerated chemo until we had to have her scheduled at OSU on one of my work days. I took my lunch break and picked her up in the afternoon, bringing her back to work with me. She didn’t miss a beat, as she passed out hugs and mooched from anyone she could find. On the days we returned straight home from OSU, she immediately ran and played hard, usually doing her best to dig up some creatures at "her" hay bales before taking a nap. While people usually lose their hair on the protocol JJ is on, it is much less typical to have alopecia with dogs. However, Goldens do shed their undercoat typically twice a year, and since JJ did this three months into her protocol, her coat remained sparse throughout the year because of the chemo. The most noticeable thing was her lack of whiskers. Most of the year, it looked as though I had shaved her closely and I can always tell at a glance if a photo of her was pre- or post-chemo.

Along the way, I continued to share the day to day stories, normalizing what we were going through to the best of my ability. There was a great deal of support along the way, although I also knew I was easing everyone into what eventually would be a very difficult outcome. I was straightforward in my discussions about JJ's cancer and treatments, and spent more time posting articles and discussions about end of life care in our pets. However, early on it was very clear that people were hoping for a very long remission, if not a cure. My fellow hospice and palliative care workers understood my words without needing further explanation, and they knew I was slowly preparing people, just as we do daily with our own patients and families. At the beginning, the reality was she could very well die before June, even with treatment. Despite this, it became very easy for me to follow JJ's lead in taking it one day at a time. Dogs are pretty awesome in this way and we would all be better off if we could mimic them more often. The majority of the time, it was fairly easy for me to focus on what we had, rather than get lost in the anticipatory grief of what was to come.

We knew at the beginning of her cancer diagnosis that she did not tolerate the prednisone well, which was one of the reasons she was on it for just a couple of weeks at the beginning. It wouldn't be until midway through the year, after weeks and weeks of marching down that long hallway on the way to treatments, that we would find out just how damaging it could be.