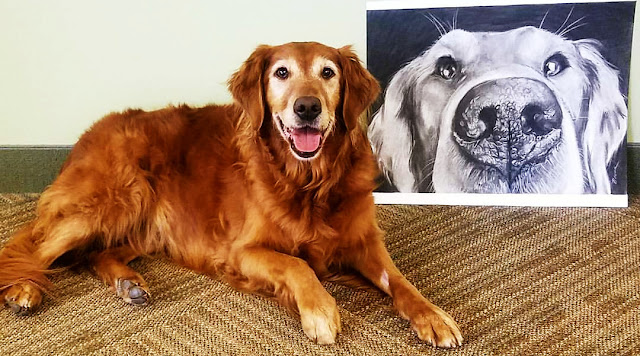 JJ was my partner not only at work, but also as my teammate in volunteering for HOPE Animal-Assisted Crisis Response. Each year, before we renewed our membership, JJ was required to undergo a physical exam. In December of 2016, during her veterinary exam, I asked to add a blood panel as it had been a couple of years since she had anything checked. She was six years old and it was a random request on my part. She had just started to have some excessive thirst and urination the day before and acted tired, although nothing abnormal showed on exam. My nurse brain immediately thought to have her kidney function and glucose levels checked, easily done through lab work, but I really wasn't worried about it. Three days later, I hadn’t heard the results, so called the clinic. We were back at work on a Monday and I asked to have the results faxed over so I could look at them. By the time I was able to take a break and scan the lab findings, I saw all was normal except for a very high calcium level. While we had to wait several days for a consultation appointment with a specialist, I tried to be optimistic that the cause of her high calcium and corresponding symptoms had a surgical fix due to an endocrine gland gone haywire. However, I had done my research and I was not surprised during our visit when I heard “lymphoma.” Still, my heart sunk to my feet and my stomach was in knots. On the drive home, it struck me how we had been down this exact path before. When JJ was just 9 weeks old, her nanny Callie was diagnosed with lymphoma at 6 years old in December of 2010. Now, we had the same diagnosis in the same month at the same age, as our young puppy Bria, who JJ nannied, waited at home for us. The similarities were uncanny and all I could think was “not again.”

While in the past we chose not to treat cancer in our dogs, given the diagnoses came late in the disease process, this time we all felt we had caught the cancer early and had a chance to buy some time with chemotherapy. Realistically, canine T-cell lymphoma is the more aggressive type and even with treatment, only 50% of dogs treated live past 4 to 6 months. At the time of JJ’s diagnosis, all her symptoms were a result of the high calcium level. The goal with starting chemo was to alleviate these symptoms and slow down the progression of the cancer. She also was started on prednisone, a steroid, for a short time. We often use steroids for symptom management in hospice patients, so I am very aware of its side effect causing appetite stimulation. Some people can get to the point where they want to eat almost around the clock. Animals are not different, and JJ was in constant search of something to eat. Her charming, mooch behavior rocketed to a whole new level when on the prednisone. Luckily, we tapered her off this medication within a few weeks and her ravenous appetite subsided somewhat.

At the time of diagnosis, I made the decision to be transparent about all we would go through on JJ’s Facebook page. I had spent years sharing about end of life and hospice, so focusing a bit more on these issues with our pets made sense. My experience over the years has shown that if anything, coping with end of life decisions and grief for our pets can be so much more intense than even family members. I am a pragmatic hospice nurse after all these years, so knew what the eventual outcome would be, even if I did not know the timing. I had spent years sharing JJ's voice, silliness, and compassion, all while building a large community around her. I knew I would be able to multitask and help guide people through this journey as a hospice nurse, while taking personal time and energy at home to cope and grieve with a very difficult situation. 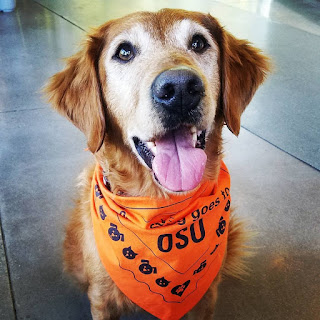 We chose to transfer JJ’s care to Oregon State University, where they have a vet school and teaching hospital. They are closer in proximity to us and have access to the latest cancer treatments. When I first called, they were booking new patients almost three months out. Once they reviewed her records—the prognosis of dogs with lymphoma is only one to three months without treatment, so time was of the essence––they found a way to fit her in and we had our first appointment three weeks later. We didn’t want to wait to start treatment, so JJ received her first two chemotherapy treatments at the specialty clinic before transferring to OSU.

When vets say dogs in general tolerate chemotherapy well, they aren’t kidding. In people, chemo is given in search of a cure, which means higher doses that cause many awful side effects. Honestly, it takes humans to hell and back. As pet owners, it would be a rare person willing to do the same thing to their animal. The focus on veterinary treatments are instead palliative in nature. Palliative care focuses on quality of life when choosing treatment options. Animals are given a less concentrated amount of chemo with the goal of slowing down or stopping the cancer without making them miserable. From my first discussion with our oncologist at OSU, I was reassured that she had this same approach. We all knew we were buying time from the beginning, though as in hospice work, there is no crystal ball.

Through the generosity of JJ's many followers, we knew we would be able to get her the treatment she required without a second thought. We were, and remain, incredibly thankful for this. What we didn't know when we transferred to OSU was how much time we would have with JJ.