The Passing of the Torch

The loss of our Hospice House therapy dog was difficult on everyone, although for me, it meant finding a way to adjust the way I did my hospice nursing. For people who didn’t know the role she played at our hospice, they would say “Oh, it must be nice to take your dog to work”, not understanding the work she did with patients, families, visitors, volunteers, and staff. Since we opened in 2012, I always had JJ at my side during our 12-hour shifts, with the rare exception of a day when she needed to stay home. For weeks after she died, I would look down as I scooted my chair away from the computer, wanting to make sure I didn’t run over her tail. I caught myself many times starting off to look where she had gone when she wasn’t at my side. The hardest moment, however, came when we had a weekday walkout of a patient who had died. The staff lined the halls as usual, but I could see the sadness on their faces as they watched us approach without the familiar figure of JJ walking next to the gurney. Her presence often elicited the most emotion during these walkouts and everyone was acutely aware of her absence. 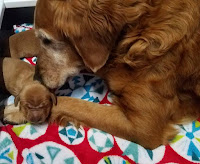 I knew I would be picking a puppy from our litter born just eight days before we knew JJ’s lymphoma was no longer responding to the chemo. As a hospice nurse, I always consider my role as being a midwife at the end of the life cycle. When puppies arrive, it’s a nice break to midwife the other end of the life cycle. It was especially true of these puppies, although when they arrived into the world, with a very anxious JJ waiting to greet them all, I had no idea of the short time she would have with them. We had gotten so much extra time from the lymphoma treatments, I dared to imagine JJ would help me pick out “her” puppy and assist me with her training, at least for a little while. 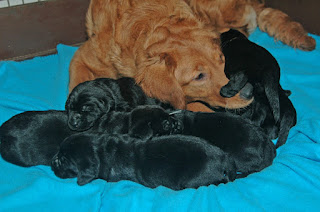 While JJ loved people and enjoyed the work she did, she absolutely went bonkers when puppies were around. She was four months old when she met her first “Littles” and would get in the whelping box with them when mom was taking a break. Anytime the warming box came out, signifying puppy arrival time, she was beside herself with joy, although terribly impatient to be able to meet them and give her stamp of approval. Over the years, she would clean, snuggle, and spend as much time as she could with these magical creatures, even though she never had her own puppies. The mothering instinct is incredibly strong in JJ’s family lines. Even her sire, Dash, loved puppies and considered it Christmas morning when they arrived.

JJ’s niece Shylah had six boys and three girls. I knew I would be keeping a girl, but those decisions come as the weeks progress. There is no way to know what a puppy’s temperament and personality will be like when they are newly born. The girls wore the colors lime, pink, and aqua on their collars, which helped me to keep track of their weights. My days during JJ’s decline and after her death were busy with the tasks of caring for “The Littles”. It is very reminiscent of when we have young children in a family who are present at the Hospice House when a loved one is dying. It reminds us all that life does go on, even with death in our midst. 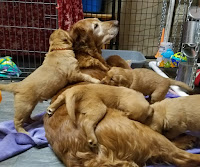 Watching these puppies grow up was good medicine for so many after JJ died. While it has been true that our puppies have brought joy and peace to those struggling in the past, this was the Healing Hearts Litter, puppies helping thousands through their grief for JJ even from afar. Long before it was time for them to move on and spread their magic, their antics brought smiles. JJ’s sister Ottie clearly chose to spend a great amount of time with them, in her own way of dealing with JJ’s absence.

I kept my puppy’s identity a secret, even though I had made my decision by the time they were seven weeks old. These puppies were all nice, although one did stand out with her personality and structure. Since my goal was not only to have a therapy dog, but another Animal-Assisted Crisis Response partner, I look for a puppy who is bold, confident, enjoys people, has courage to encounter new and strange things, and is willing to work with me. When we did our temperament testing a couple of days before they went home, I got a few chuckles when I saved my puppy for last. I had only said “You’ll see why I picked her” to the others. This girl knew how to command attention when she came into the room and I distinctly remember another puppy owner making the remark about a “bucking bronco”. Luckily, some of that puppy energy has waned as she has gotten a bit older.

The great reveal came on the day all the puppies went home. Miss Pink was the girl would be staying. Her registered name would be Calhoun’s Get The Party Started, but she would be known less formally as Ember. Only time will tell if Ember becomes our Hospice House therapy dog successor, but early indications are good. She’ll be her own girl, although it will be easy to make comparisons with her well-known aunt. She already has many mannerisms that are similar, and they resemble each other in looks. So far, she has been making therapy puppy visits to different locations and will be starting half days at the Hospice House, learning about her new second home.

The great challenge I have found was not something I would have never thought about so many years ago when I started JJ's social media sites. In retrospect, having a name more generic would be easier to pass on. Many asked when JJ died if I would start a new page for Ember. However, a lot of time and effort went into creating the community around JJ and her work. I knew I wouldn't give it up, would raise Ember on JJ's page, and am still negotiating how to transition the changing of the guard, if you will. As I remind people often, JJ is not being replaced; her legacy lives on in the next generation. Those of us who are used to living with dogs would feel an empty space in our hearts if not refilled somehow. Modeling how to move on while not forgetting is something that is important to do. We all experience loss throughout our lives, whether people, pets, or both. This may be something that just is easier for me. I'm not someone who spends a lot of time in the past, other than to reflect and smile or cry when needed.

I am certain people will find that falling in love with a new puppy over time will occur naturally. There with be many stories to share about this little one as she grows and learns her way in life. Unfortunately, our pets have a far shorter lifespan than we do, so experiencing the heartache of death will continue to occur as my years continue. However, the memories and connection will always make it worth it. We now have a new family member to continue the Barke Diem tradition. 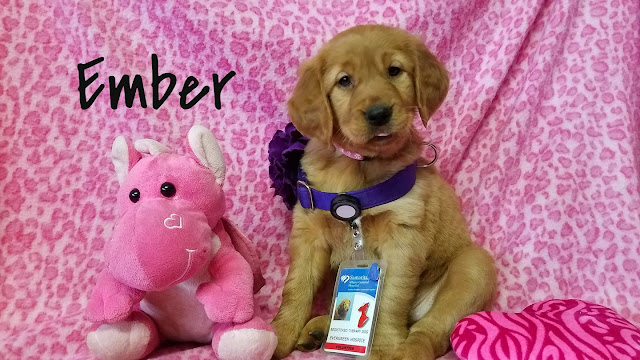