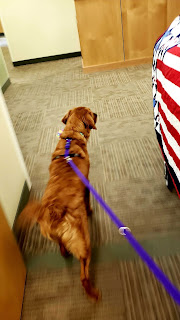 On occasion, I get email requests from various sources. While I am not a social media "influencer", from time to time, JJ’s Facebook page gets extra attention and I get requests for various projects. I use the Facebook page to educate and support the issues around my passion, death and dying, both in people and in our pets. When not sharing fun and silly dog stories, videos, and photos, I share articles that talk about issues that accompany death and dying. These have included the physical changes when someone is actively dying, different components of grief, how to support someone whose loved one is dying, the ways hospice can be helpful, issues around a pet’s disease and eventual death, and how to make assessments of how a pet is doing. One of the most important jobs of a hospice worker is to help others be educated and prepared for the eventual death of a loved one. It’s no different for my online education. The email request I received was a valid one in relation to the discussions we have around end of life. However, I found this one had a twist.

I am a very pragmatic person and I come by this honestly, as my parents were the same and raised us to be realistic. I think in the conversation of end of life, talking about things such as the planning that goes around someone's death is helpful ahead of time. There is much less stress on family members if plans are in place, including funeral plans. Sometimes, it is just too difficult for people and their loved ones to discuss, and sometimes finances are a serious issue when it comes to funeral planning. As hospice workers, we often are the ones to initiate these discussions. When someone comes onto hospice, it is expected that eventually they will die, whether it be sooner or later. We will need to know what mortuary to contact at the time of death.

My mother had ALS, and her desire was to donate her brain to science. However, after speaking to one of the ALS researchers, we discovered this was out of the question, as the small town in Montana was too far away to procure her brain in the short time required. She was disappointed, but at least we knew ahead of time. Very often, the altruistic nature of people guides them to donate their body to science upon death. It also is a way for families with no funds to deal with what to do after death. The email request I received this past week was from a marketing agency, specializing in business growth as technology evolves. They serve many huge and well known companies. Specifically, the request was from the representative of a body donation company “looking for advocates like yourself to help spread awareness about the importance and need of organ and whole-body donors.” JJ’s Facebook page was mentioned as a place to start the conversation and I was invited to apply from the project manager. The link made it appear that a monetary fee would be involved for my effort. It is important to point out, whole body donation is completely different than organ donation, when the organs of someone who has been declared brain dead are used to help give life to so many others in need. I have been an organ donor for all of my adult life, and would assist families in making this decision when I was an ICU nurse.

I will take a moment to digress to a topic that has become a big issue in the world these days. Critical thinking, or the lack thereof. Critical thinking is quickly becoming a lost art and is simply the objective analysis of facts to form a judgement. While this was heavily stressed in nursing school in college, critical thinking does not require any special education. It does require a willingness to explore a topic through more than one internet article posted and widely shared as fact. The internet is a double-edged sword. There is a lot of information floating about, but it requires the desire to engage critical thinking and take more time than one click to investigate which information is correct and which is nonsense.

So, I first did some investigation. This is how I found out it was a marketing agency who was reaching out to me. Then I went in search of the company they were asking me to discuss, in the form of “sharing awareness”. I have not spent much time thinking about body donation, other than calling different ones in our area at the time of a patient’s death. Recently, a medical school was built in our community, and many of our body donations have been to their program. As I researched, I found out that there are companies making huge profits by receiving body donations and then selling either whole bodies or body parts. While not illegal, it doesn’t sound as if this is made clear to loved ones. While they don’t have to pay for cremation or burial, they certainly aren’t getting any proceeds when a body is sold. It was incredibly eye opening and got my attention when one article talked about the marketing “cash cow” of hospice patients for donation. You might imagine how this got my ire up a bit. I have downloaded some of the consents used by different programs, and it is easy to see how these details would be missed with the nebulous language used, buried in pages of consent. I chose to email back a response saying thank you for reaching out, but I was not interested in the conversation centered on a company that makes great profits but does not make it clear to families that body parts are often sold. I have not heard back, but certainly am discussing the pros and cons to donation of body at time of death. It probably isn’t in the form they were thinking when I was invited to submit my application to partner with them.

None of this is to say body donation is a bad idea, but we emphasize informed consent in the healthcare world. My concern in reading peoples’ stories is the consent is not terribly clear in many cases. For those interested in pursuing this as an option at time of death, check into local universities that may have a donation program, as their students are much more likely to benefit. Ask questions. Science is a great thing and research and healthcare students need donations. This week has made me think of just one more piece of planning when it comes to my own death. I am also happy to have used my own critical thinking instead of hastily jumping in uninformed, no matter what the pay may have been.