Grief Felt 'Round The World


When I lived in the Seattle area, I commuted by ferry for many years. In the winter months, it was always a special gift to have the ferry captain announce the presence of orcas as he stopped the engines to make sure they safely passed. Everyone would rush to watch the big black dorsal fins rise and fall, hoping for a peek of a spyhop. I never minded the extra 10 minutes being added to the trip for such occasions. The southern resident pods J and K often are found in the winter months chasing salmon in the inland waters off Seattle before moving on to the San Juan Islands in the warmer months, while members of the L pod are rarely seen.


In the Pacific Northwest, orcas have been mainstays in the coastal waters from western Canada and Washington to as far south as California. First Nation tribes such as the Tlingit, Tsimshian, and Kwakiutl all have rich cultures surrounding killer whales, or orcas, as depicted in stories, legends, and artwork. In 2013, long after I had left the area, I remember reading the story of tribal artifacts being moved from a museum in Seattle to the new Suquamish Museum. This new museum was located not far from where I had been living when I experienced those special ferry commutes. On this trip, as the ferry approached the Bainbridge Island terminal, it was surrounded by close to three dozen orcas from both the J and K pods. Whether they were giving their blessing to the artifacts returning home or it was simply a happy coincidence, the scene would have been an amazing thing to experience.

Among First Nation tribes, the killer whale symbolizes family, romance, longevity, harmony, travel, community and protection. Orcas travel in large groups of families, working together to protect all members of their pod, while raising new calves with care. They often stay their whole lives with the same pod, although there also are transient whales who live outside the resident pods. Each orca can be identified by its unique dorsal fin as well as saddle markings in white. The Center for Whale Research closely monitors and documents each orca. In recent years, there has been a marked decline in the number of chinook salmon, putting the pods into crisis and causing starvation and death.

Recently, the tragedy of J-35, known as Tahlequah, has been broadcast around the world. She gave birth to a calf too emaciated to live more than thirty minutes. Tahlequah was seen surfacing with the dead calf cradled on top of her, something that had been observed in the past with other orcas. As researchers started documenting this through photos, J-35’s story spread. It became clear how deeply she grieved, even though scientists were reluctant to apply such an anthropomorphic term to an animal. Each day brought a new sighting of Tahlequah continuing to carry her calf, mourning in a way no other orca had been observed doing for so long. As daily updates were shared, the sorrow of the community and those following the story around the world grew. During this time, many came to learn of the deeper plight facing the critically endangered whales from the southern pods. They are starving and at a real risk of disappearing in the very near future.

The images and ongoing narrative elicited a deep sadness and despair. It was as if our collective grief was being played out in the waters off Vancouver Island. Mourning not only for a heartbroken mother's display of love and connection, but for a broken environment that has brought us to this point. Day by day, those who were keeping vigil with Tahlequah reported she continued to carry and push her calf, while being accompanied by the rest of her pod. If she dropped the calf, she would have to dive deeply to retrieve it as her mourning procession continued. She was not ready to let go. By day 16, scientists were increasingly worried about her health and welfare, but would not step in to force her to give up her calf. On day 17, in a collective sigh of relief, it was over. J-35 said goodbye to her baby after traveling with her body for 1000 miles. She appeared in good health as she resumed chasing salmon with the rest of her pod, finding a way to resume some normalcy. 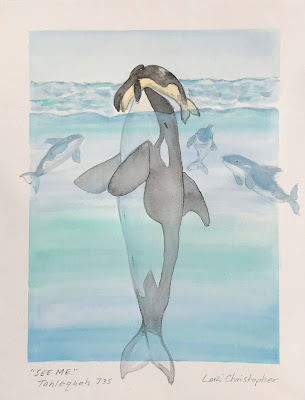 Her story struck so many, especially mothers who have lost their own children. While our culture is not very tolerant of grieving, especially prolonged grieving, it was as if Tahlequah spoke to us all through her actions and conveyed the notion that this was her time and she would take as long as she needed. It was a heart breaking reminder that grief is a part of life and there is no one way to express it.

A northwest artist, Lori Christopher, captured this image so eloquently, in a way that struck to the core for so many who have lived through their own grief, especially as parents. You can see more of her story here and learn about the ongoing crisis of the orcas and what needs to be done to help them survive. Thank you Lori, for letting us share your painting.

Thank you Tahlequah for reminding us that a mother's love never dies.