My intent was always to raise a puppy as a potential therapy dog while still having a working dog with me while the puppy matured. When JJ was just a puppy, her mentor and nanny Callie was working with me as the second therapy dog we had with our hospice program. When Callie died in January 2011, JJ was only four months old. She had time to slowly work into her new role, as we had not yet built our inpatient hospice and would occasionally see patients in facilities or private homes while training for her job as a therapy dog. JJ had plenty of time to grow into this role, alongside her mother Gamine, who passed her first therapy dog evaluation when she was nine years old. As time went on, it was always my plan to have another therapy dog after Gamine retired and JJ continued to be my partner. However, I wasn’t in a hurry, because at the time JJ was what we all would consider on the younger side. Unfortunately, she was diagnosed with lymphoma shortly after she turned six years old. There wasn’t going to be time to have her raise an understudy.

After JJ died, it was comforting to spend time with the little creatures she was so fond of. I noticed JJ’s sister Ottie wanting to spend much more time with them as well. She was their grandmother and often would let them pretend nurse, as she expertly flipped them and cleaned them when needed. Her daughter Shylah was doing very well at mothering and didn’t really need help, but graciously allowed Ottie to have as much puppy time as she needed. It seemed to help keep us all distracted for the several weeks when JJ’s absence was felt so keenly at home. Videos and live streaming of the puppy antics also were good for so many of JJ’s followers during this time.


I am fortunate to be a part of our therapy dog organization, Project Canine. I am honored to carry their Puppy Partner credential, allowing me to visit with puppies under my care until they are five months old. Before I made the announcement of who would be staying, Ember and her litter mates visited the Hospice House a couple of times before going to their new homes. This is one of the highlights for our hospice staff and is planned well in advance, so anyone interested can schedule some puppy time into their work day. These visits are great for puppy socialization as well as wonderful for people who enjoy being around puppies.

At eight weeks old, Ember’s adventure started in earnest. The announcement of which puppy was staying coincided with a newspaper article about JJ's successor. Just as I had with her mom Shylah, Ember started doing her therapy puppy visits at different locations under my Project Canine Puppy Partner credential. JJ’s popularity opened doors for opportunities to visit many places I didn't have access for in the past. In between several trips to the Hospice House, she visited the local hospital, 911 call center, infusion center, and hung out on a fire truck. At this young age, she was curious, confident, enjoyed people, and was resilient if anything startled her. While some people think quiet puppies would be the ones to make good therapy dogs, it often is the opposite. A therapy dog needs to want to initiate contact with strangers, not something a shy puppy often does. A puppy like this typically is not comfortable visiting new environments, at least from the outset.

Since JJ and I also did Animal Assisted Crisis Response, my goal is to 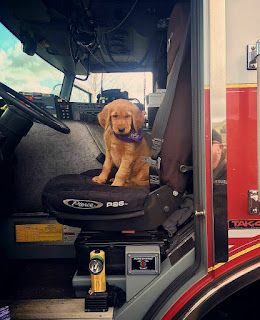 have another canine partner for this volunteer work. Crisis response dogs need to be steady, brave, and compassionate to their core while visiting with strangers in very unfamiliar places. We do our best to raise our puppies to be bold, confident, and engaging before they move on to their new homes. Ember  loved to explore, and would eagerly engage with me, displaying a sassy spunk in almost everything she did. She also clearly loved meeting new people, especially children. Not only were our puppy visits making people happy, we were able to get early exposure to things like elevators, hospitals, and fire trucks. As she ages, we'll continue to find new things to explore and see, including JJ's great nemesis, the skateboard. Ember's siblings are all nice puppies, and we like to think JJ spread some of her magic to them all before she died. 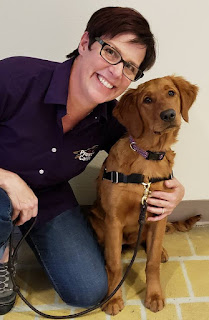 Once Ember turned five months old, we needed to test for her individual puppy evaluation with Project Canine. Since I am one of the two instructor and examiners in Oregon, one of our board members traveled down to help test her. While I helped teach our four-hour class prior to evaluations, Ember handled the class like a rock star, relaxing either under my feet or in her crate. Some of the dogs had reactive barking to seeing people walk by the windows, while Ember would just raise her head as if saying “Why are you waking me?” She did have a couple of short episodes of whining when I left the room, but overall was a rock star. She handled her puppy evaluation well. In addition to having to do most of the elements of our adult therapy dog evaluation, we include several things specific to young puppies, such as mouthing, play drive, and how they respond to being held on their backs for a short time. Due to the timing, Ember took the older puppy exam and easily passed, something very few puppies under the age of one can do. 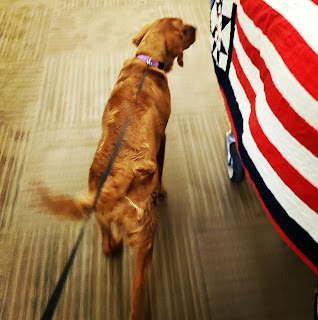 After this, we made the trek to the Samaritan Human Resources office where she had her photo taken for her work badge. It is always a highlight for staff to have one of the therapy dogs come in to get their photo taken. At five months, she started coming to work with me for half days, getting used to the environment and routine of the Hospice House. It felt good to have a dog back in the building, at least part time. One of the routines we all missed greatly was JJ's presence at our walkouts after someone had died. While she had taught herself to do this, we all thought it was a great idea that should carry on. It was on one of Ember's first work days when she was able to first participate. While she remained on leash, it was as if she knew exactly what she was doing.

By seven months, Ember had reached the size JJ was as an adult. As puppies approach their adult size, it's easy to forget they are still puppies. However, this is the time they start what we call the teenage months. They develop selective hearing, want to make their own decisions, and rebel against the rules. It became clear when it was time to change Ember's routine. It doesn't work to have a bored, energetic puppy when I am busy with work without enough time to spend with her. It's never a good idea to rush a young dog who already is loving the job. To do so can develop bad habits that are difficult to undo. Now, it's on to the next step. Volunteer visits, maintaining structure and impulse control, working on obedience and continued learning, and a lot of play. Let the teenage antics commence.